A shed for all seasons 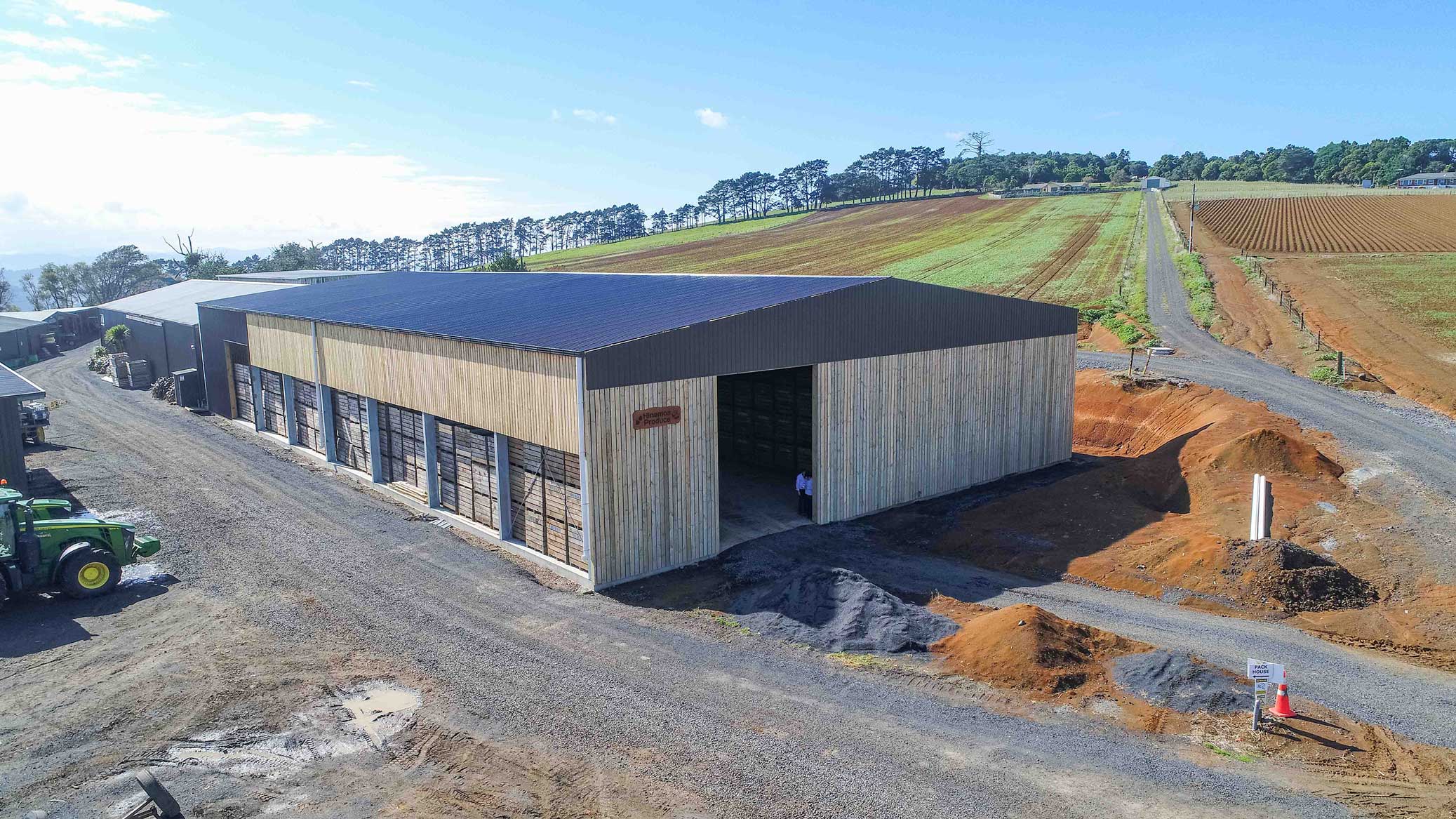 There’s that old saying, ‘Build it and they will come.’ In this particular case,‘they’ won’t be birds, though. Chris Nicholson from Hinemoa Quality Producers has thoroughly mitigated that issue, thanks to some clever design features engineered into the latest build on his property. The new structure is getting plenty of attention (generally from humans) and has certainly created a new focal point as you approach Chris’ family business up a long driveway in Pukekawa District, south of Tuakau.

The 1350m2 open-sided shed is a XL Structural Steel design. At just 10 months old and compared to the last shed built on the property – in 1993 – the structure is brand-spanking and features plenty of architectural and material advances.

Chris needed a big shed in order to be able to store more than 2000 produce bins, which will soon be full of potatoes and onions; he and his team will harvest 3000 tonne of each by the peak of the season. The new shed adjoins an older building that is still used as a pack house (albeit outfitted with some clever high-tech palletising machinery). 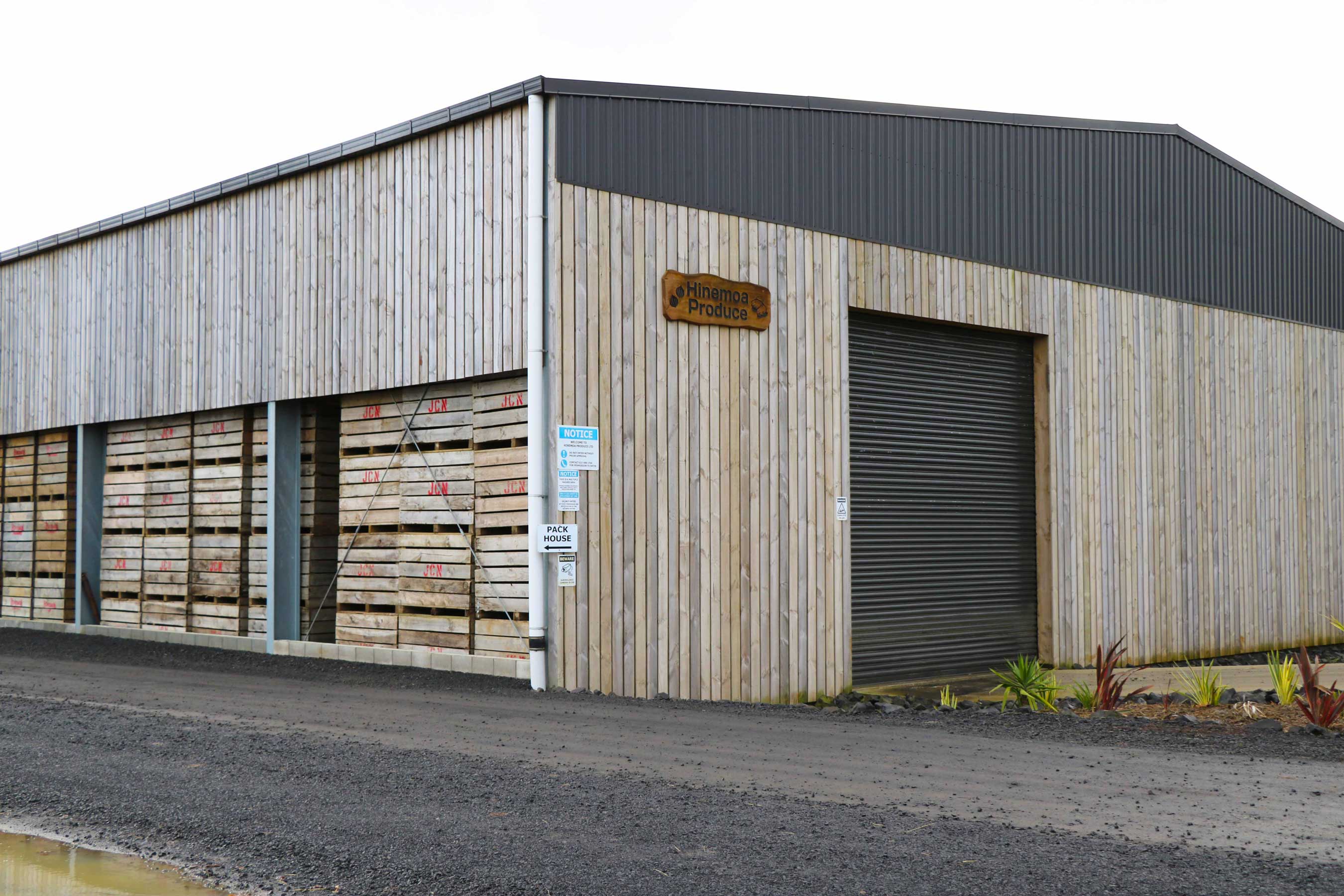 Things have changed a bit since Chris’ grandfather established a sheep and beef farm on the property at the end of World War II. Cropping became the chief focus in the late-1970s and, while today, around 60 steers are grazed on the run-off areas, the old cattle yards have gone, replaced by the new XL Structural Steel shed out of necessity.

“Previously, we’d need to begin each day by transferring and stacking bins out in the yard before other processing could happen. Now we’ve got a purpose-built area for bin storage that will suit the needs of our output for several years to come. In fact, we designed the shed to be around 30 metres larger than what we probably need it to be, but that’s simply to ensure the operation is future proofed to a degree.

We’re harvesting and processing large amounts of produce here, so we need to make sure the workflow is consistent; obviously machinery plays a big part in that but so does our storage infrastructure.”

A familiar livery around Counties Manukau and beyond, Hinemoa Quality Producers run a 150-hectare mix of onions and potatoes, with the balance of the property seeded with lucerne and barley, which is sold as feedlots. Chris says a strict rotation of two-yearly cycles for onions, then lucerne, then potatoes helps with ground conditioning.

The company counts plenty of big names among its client base, including Turners & Growers, Bluebird, and the Pak'nSave supermarket group. Sixty percent of Hinemoa’s onion crop is exported to the Pacific.

In designing the layout of the new building, Chris says form had to follow function, with air flow being of paramount consideration.

“Although today it’s relatively empty, in February it will be full,” he says. “It has been designed so that each row of bins has a six-inch gap between them, and then there is a four-inch gap between each stack. We’ve allowed for enough room to manoeuvre trucks and other machinery around inside, even when it is much fuller than you see it today - you really don’t realise how large it is until you park a big truck in there and look at the space around it.

“That’s where XL Structural’s design work really comes into its own. In opening up the interior and not having any support poles interrupting floor space, it allows us to make our machine movements quicker and make more use of the available space.” 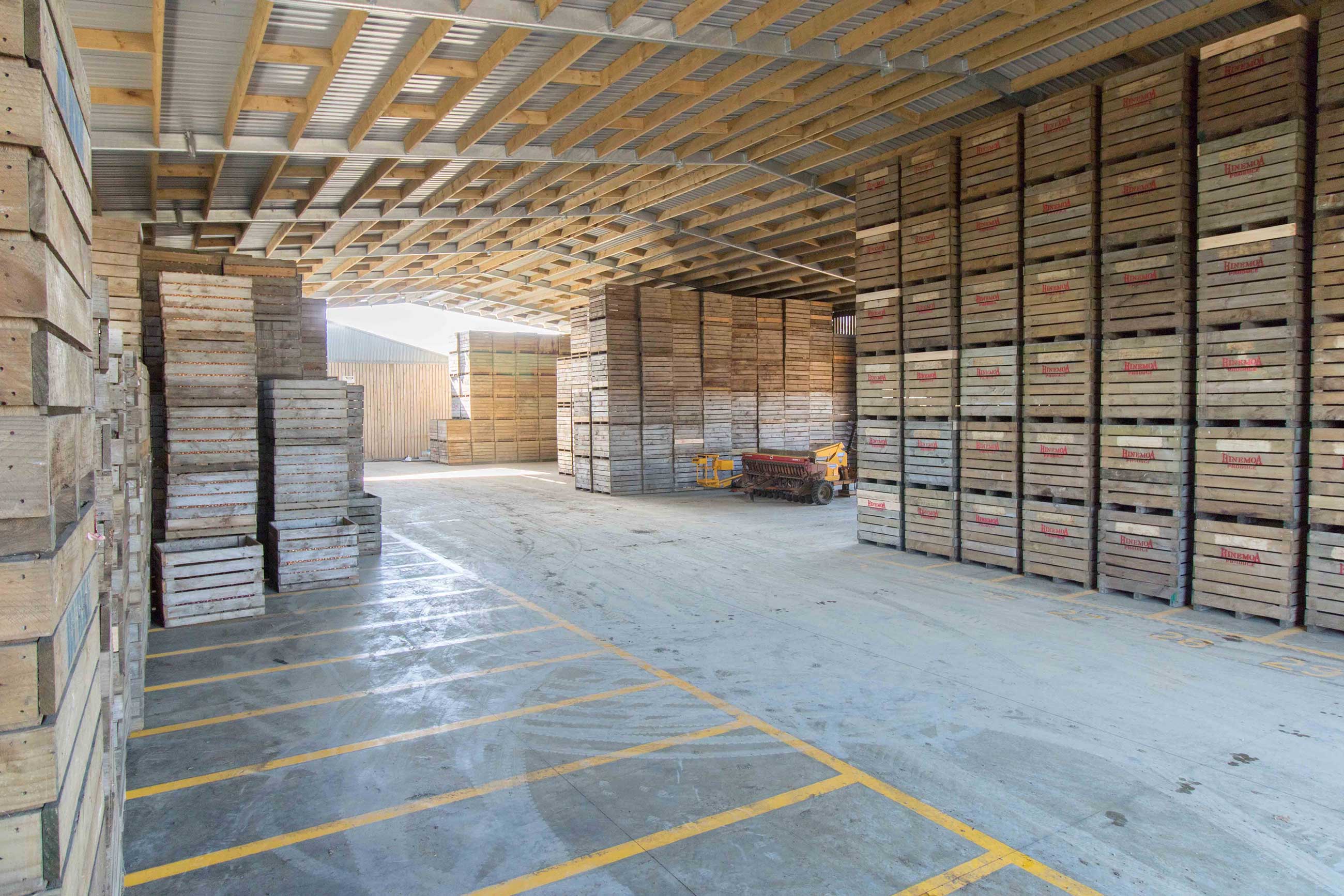 Chris says a wide span and high ceiling height to allow for greater bin volume were key attributes for him. XL Structural worked with him in order to assess what would be needed.

“I think XL Structural has designed wider and longer sheds than this in the past, but the structure goes from seven metres at the sides up to 10.9 metres at the roof peak, which is pretty high. They were excellent at advising us on all the options, though; they’re the masters at constructing large-scale buildings, so we trusted their opinion.”

The XL Structural design proved ideal for Chris’ needs, with the company’s Clearspan template mitigating the need for centre poles. XL Structural says that most of its clients can fit up to 50% more equipment or produce inside their buildings.

As already mentioned, and equally handy for Chris, is XL Structural's Zero-Bird-Perch rafter design, which eliminates nooks where birds might nest, or at least take what polite society would call a ‘rest stop’. The special ‘slot and bolt’ design makes for a flush surface.

The building’s rafters are constructed from hot dip galvanised steel giving you maximum longevity. The comprehensive molten zinc coating gives much better overall coverage inside and out, this results in a coating that is 2.5 times thicker than cold-formed steel which is only electroplated before forming therefore more prone to structural rust damage.

So, if it’s future proofing Chris was after, he has certainly got it.

A further bonus to the crops Chris will be placing inside the new shed during harvest is the building’s timber frame construction, which allows for better temperature control and doesn’t ‘sweat’ like an all-steel shed. Of course, the side-less design means this is a given, but condensation dripping down from above has also been eradicated.

The front of the building features drainage sumps built to specification to perform in a one-hundred-year flood event. The attractive slat wood finish (full length at the front of the building, one-third at the sides) was a feature of Chris’ own design, though – “Just to give it a bit of character,” he laughs.

It certainly looks great, accentuating the timber construction of the remainder of the structure and creating plenty of impact as the first building visitors to the company’s property see when they arrive.

“You don’t build a new shed like this every year. When you do it, you have to do it right so that it works for you for a long time to come,” Chris says.

“I think a combination of the footprint of the shed, the material it is constructed from and the fact that XL Structural stand behind the strength and endurance of their sheds means it has been a very successful project.

“Now we just have to have a good harvest and fill it full of produce,” he smiles. So maybe that saying should be something more along the lines of ‘Build it and the crops will come’? Here’s hoping.

‹ What is XL structural steel?