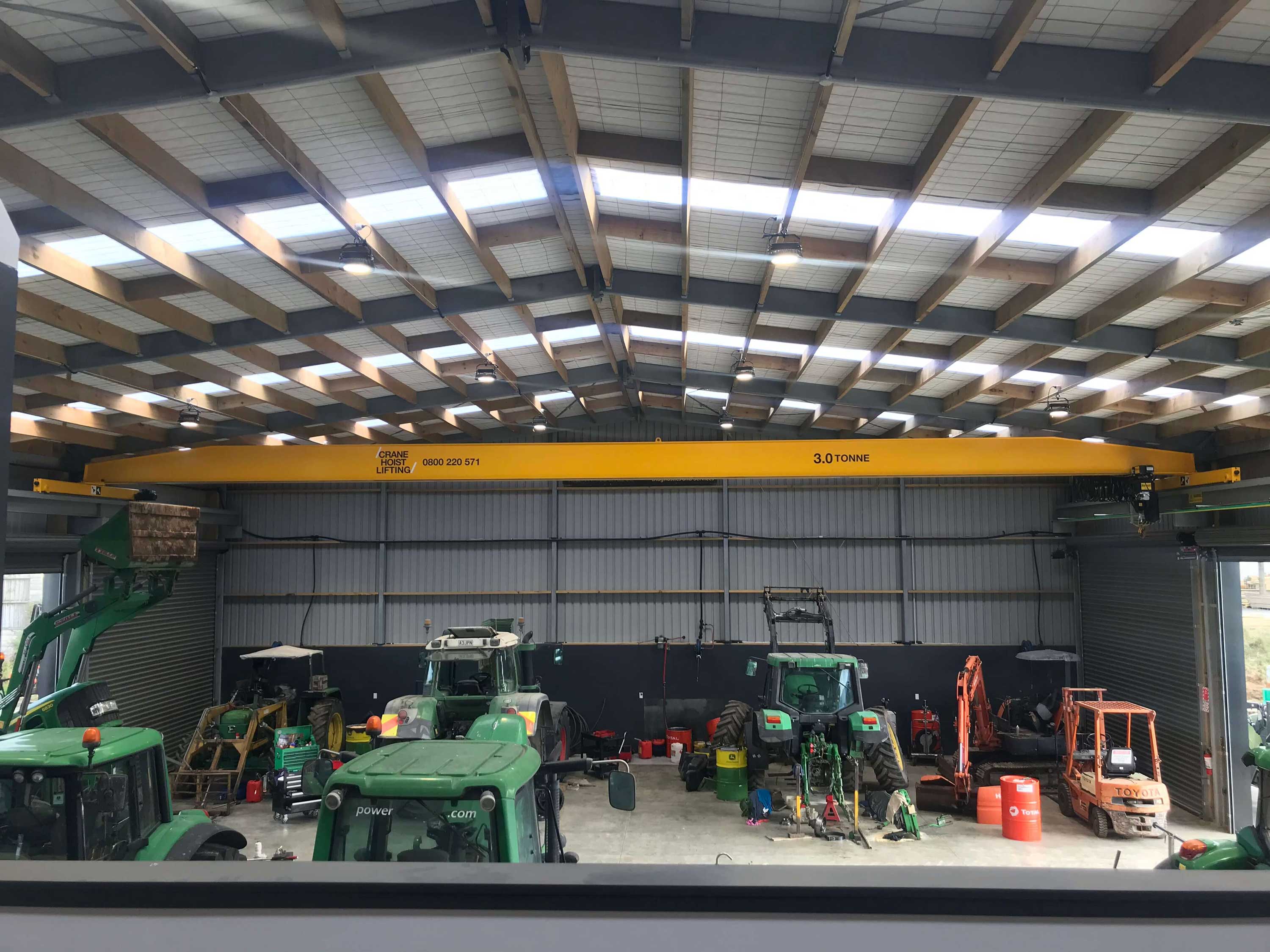 An overhead crane has many uses, they are able to move heavy & bulky loads, they assist with product assembly & manufacturing, they are able to load trucks and containers very effectively and they maximise floor storage space.

Not all buildings are capable of supporting such high loads overhead and it’s imperative that such a requirement is built into the building’s design from the beginning. Failure to do so may reduce the future capability of the building and its useability as business needs adapt.

However, there are numerous benefits to installing an overhead crane. These include, but are not limited to, the following:

While some manufacturing and storage processes are best suited to using forklifts to move and lift products and assemblies - a lot have defaulted to their use as an economical way to get a production or assembly facility started. However as a process grows, using forklifts in manufacturing processes can bring additional dangers and costs which can be avoided.

A forklift requires a lot of space to manoeuvre and often damages products or machinery in the process. Compare that to an overhead crane, which travels over the top of stock, machinery, and personnel and you can quickly see how an overhead crane allows you to maximise your floor space.

The risk from forklifts

When an operator uses a forklift they need to ensure the load is stacked carefully and correctly or the load might topple, with dire consequences. Forklifts operate on ground level which is a risk to others working on the factory floor and a forklift, or telehandler, requires a certain amount of space to firstly move around the shop and secondly enough space to then swing the load into place.

The dangers of forklifts in a busy building were made very apparent in May 2018 when a major freight distribution and logistics company was taken to court over a forklift incident which led to the tragic loss of life. Sadly this isn’t an isolated incident. A 16-year-old boy tragically lost his life in South Auckland in an incident involving a forklift and a transport company was fined $272,000 in a separate incident also in Auckland. Unconfirmed analysis from the head of the Forklift Association estimates there could be as many as 10 deaths per year in New Zealand relating to forklifts.

While it’s the responsibility of the business owners and directors to ensure the safest working environment possible, busy seasons and increased demand heighten the risks at work. Moving product and people at speed significantly increases the likelihood of an accident. Safety measures such as walkway barriers and gates increase safety, but with forklift operator error a leading cause of accidents there’s only so much a business can do. The best course of action may be to remove dangerous activities where possible. 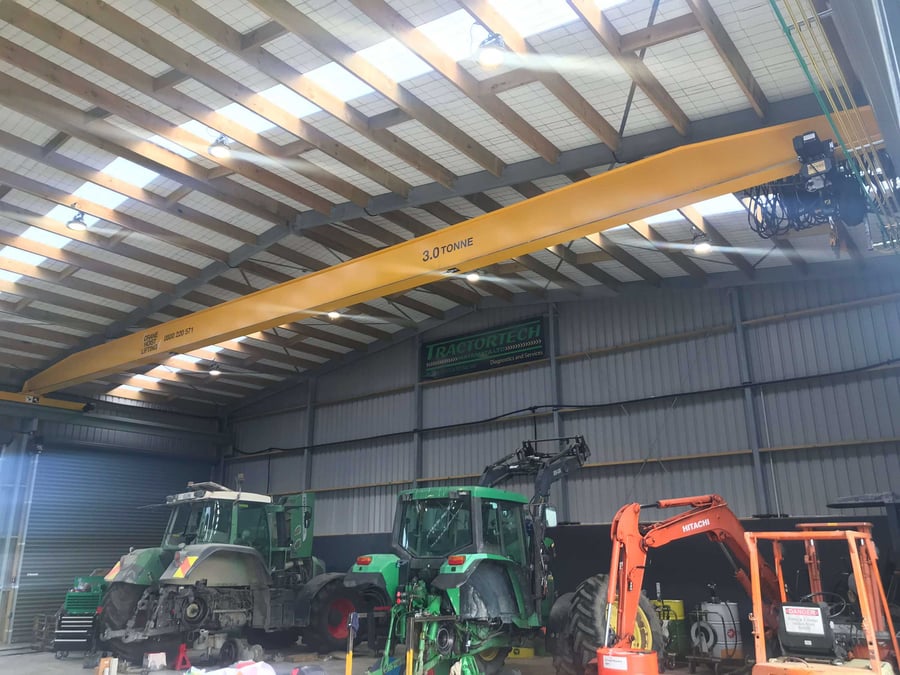 There are numerous safety benefits to using an overhead crane over forklifts and telehandlers. As well as reducing floor-level hazards, the operator isn’t multitasking to the same level as a forklift driver enabling them to monitor hazards and risks.

Safety training for overhead cranes is accessible across New Zealand to further reduce risks, and at less than $700 +GST per person, it’s an affordable safety option too. Consider including modern features in your overhead crane, such as anti-sway technology, which allows an operator to move & place loads more precisely using the loads centre of gravity to further increase safety.

One of the most significant ways an overhead crane can be made safe and increase productivity is to bring in specialist advice on its installation from the start of a new building’s construction. While the gantries do impose a lot of load on the structure, it isn’t necessarily exponentially more expensive to design the structure to support a gantry now - or in the future.

At XL Structural Steel there exists a raft of experience designing overhead cranes into buildings with engineering expertise to ensure it meets user requirements.

Cranes can be configured to client specifications:

There are a number of types of gantry cranes available to be installed in an XL Structural Steel building, with the main two showcased below:

A common type of overhead crane. These feature downshop rails, fixed to corbels along the length of the building with a bridge girder spanning the width of the building. The hoist is often underslung on the bridging element.

In most cases cranes have a theoretical design life of 25 years, while the componentry has a theoretical design life of 10 years – after the first 10 years the crane can be overhauled and the crane can operate for a further 10 years. Due to the extreme loads overhead cranes are subjected to it’s always advised that regular inspections are conducted.

In some applications, multiple cranes may need to be added to a bay. When two or more cranes operate in one bay, anti-collision devices can be installed between the cranes to further increase safety and reduce errors. Should an engineer require the cranes to be spaced apart from one another for building loading purposes then this device can be set to the engineer’s requirement (i.e. 6m gap between the two cranes for instance). Should there be no spacing requirement the device still slows the cranes down as they approach one another and eliminates high-speed impact.

If you’re constructing a commercial building as an investment to be tenanted by another business then a full gantry installation may not be required, but the groundwork and structural engineering to support an overhead crane in the future can be factored in. Buildings with only corbels installed to “future proof” the building (i.e. excluding the Downshop runway beams, crane rail & end stops) are possible if looking for maximum versatility in the future – this makes installing a crane and supporting steelwork in the future a lot easier and a lot cheaper.

If you’re considering a new commercial building for your business and would like to discuss the benefits and considerations of an overhead crane then talk to the expert team at XL Structural Steel to discuss the factors needed in the planning stage of the build.